Skeptics once scoffed at the poor quality of audio and video streaming, but Vancouver's DENtv now sees the net technology being taken seriously 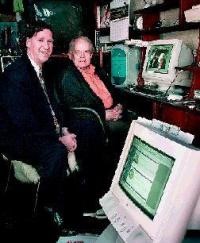 It’s tucked away in a warehouse down a dead-end street in Burnaby, but Hugh Dobbie’s DENtv broadcasts around the world.

Dobbie and Ogden are among the early adopters of streaming media — a technology that facilitates the sending of audio and video across the Internet. By doing so, it takes television and radio production from the realm of huge networks and multi-million dollar budgets and puts it online at a fraction of the cost.

It’s still early days for the technology, which should probably be called “streamed media,” but is universally termed “streaming media.” For one thing, it certainly doesn’t duplicate television broadcast quality, but improvement is measured now in days and weeks — not months and years.

Skeptics may have scoffed at its poor quality, but with its growth far outpacing that of early television and radio, there’s every indication streaming media will prove them wrong.

“We took it on the chin everywhere we went,” said Dobbie, president and chief executive officer INSINC (Interactive Netcasting Systems Inc.) that owns DENtv and DENradio. “Quality was so bad at first, but it has evolved.

“Criticism of the technology was harsh at times, but you only have to think of early radio and television to know it’s only going to get better.”

Early streaming video was hardly bigger than a postage stamp in the corner of your computer screen and the action had a choppy, delayed look of a bad home movie. And much of the streamed video viewers are seeing today is still like that. However, depending on your Internet access speed and the broadcast you’re watching, you can get close-to-television-quality streaming video to fill your computer screen.

The technology is now being taken seriously.

“Over the last four or five months, it was like a lightbulb has gone off in the world,” Dobbie said. “People have stopped laughing and they’re trying to get on the boat.”

Bandwidth is a perennial issue when it comes to pushing more data — whether it’s video or audio — over the Net.

Dobbie is counting on this shift to fuel the trend to streaming video over the Internet.

“The magic piece of this whole formula that’s somewhat out of our control is the last mile,” said Dobbie, whose company was the first in Canada to stream RealVideo — with David Chalk’s computer show — and the first to deliver programming to radio stations over the Internet.

Video and audio applications now account for two per cent of Internet traffic, a figure that’s expected to increase to six per cent by 2003. Some 200,000 streaming players are downloaded from the Web daily, according to the International Webcasters Association.

It’s a medium that fine tunes audience targeting. In one mediaontap show, European Connections, host Chris Lindgren attracts viewers all over the world who tune in for his mix of Scandinavian/Canadian news and culture, music and guest appearances.

Steve Dotto, a Net Works columnist and host of his own show Dotto on Data, broadcast through the Knowledge Network, has also expanded his show to the Web through DENtv.

“It has given us the opportunity to reach places we weren’t reaching with our broadcast signal,” Dotto said. “For me it is a question of augmenting my reach.”

Unlike television viewing, visits to the online show can be tracked in detail and the viewers can interact with the show. A host can track whether a viewer joining the audience is from Chetwynd or China.

Shows are delivered in real time and they can also be archived, so viewers can watch on their own schedule without the headache of programming the video recorder.

The average time a surfer spends at a DENtv site is more than 10 minutes — an eternity in terms of Web page viewing. The Internet also allows for a level of customization that is impossible with television.

“When someone is watching TV, it’s impossible to get them to interact,” Dotto said.

“Now we can put a contest on and get people to interact with the show.”

Dotto isn’t concerned about the video quality that is delivered online. It’s the potential that has drawn him to the medium.

“It’s improving, we’re still at such as embryonic time,” he said.

“I’m sure when Alexander Graham Bell first listened to a telephone connection, it was crap.”

“The fact we have lousy video coming over a tiny window doesn’t bother me a bit, as quality improves more and more people will come on.”

“We have fairly high expectations today but I don’t think we have any other medium that will give us this ultimate interactivity and customization.”

Ogden, also known as Dr. Tomorrow, is parlaying this ability to customize content into tightly targeted shows. Currently he has eight shows running on his network, including his own.

One example of audience targeting is a Chinese-language broadcast scheduled to debut this weekend that will coach would-be emigrants to North America on cultural and business differences they can expect to find here.

Ogden says streaming media will bear out his earlier predictions of a broadcast universe that won’t be limited to 500 traditional channels, but will explode in growth to include alternate broadcasting that’s available to anyone with a camera, computer and limited investment.

“This is the first time in history that a global soapbox has been made available to anyone with relatively little investment,” he said.

“I think the creativity this will unleash among the digerati will be phenomenal.”

While the television and radio stations are the part of Insinc’s operations that are most visible to the Internet public, it’s the delivery of streaming media for corporate events, such as annual general meetings, trade shows and other presentations that pays the bills. Dobbie’s company has broadcast such events as Rogers’ annual general meeting and the Banff Television Festival ’99.

Dobbie sees the future in a host of applications that can take advantage of relatively low-cost broadcasting to targeted audiences — from distance learning to electronic commerce and sporting events.

“That’s where the business model is today,” he said.

Dobbie’s company can deliver a start-to-finish solution complete with hosts and camera operators or it can simply provide the network delivery for the broadcast, as it does with Ogden’s shows.

Dobbie said the next step is to expand the business in the U.S., where the company already rates as one of the top 10 streaming media companies on the Internet.

His company currently has a staff of 12 and is expanding its Burnaby studio.

The technology doesn’t likely have network executives losing sleep at night yet and Dobbie says it won’t. He doesn’t see it replacing traditional media.

“This in an interactive medium — you can get into a dialogue with your listeners and viewers. Why pay to broadcast to 50,000 viewers, when you can focus in on the five that really want to buy?”

Gillian Shaw has been a guest on Steve Dotto’s Dotto on Data show and Frank Ogden’s Dr. Tomorrow, both on DENtv.